The box includes three sets of shoulder plates with which to declare your allegiance, plus five options for faceplates, plenty of extra weapons to sprinkle around the various emplacements, and loads of heavy shoulder-mounted weapons to choose from. The model includes a 120mm x 92mm oval base.

Also in the box is a cardboard command terminal for the Warmaster Heavy Battle Titan, a set of 18 cards featuring the various weapon and ancillary system options available to the Titan, and a transfer sheet with 100 black and white designs covering a range of Loyalist and Traitor Titan Legions.

This miniature is supplied unpainted and requires assembly. 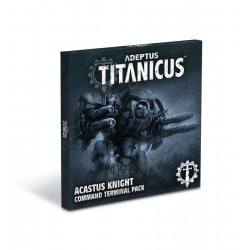